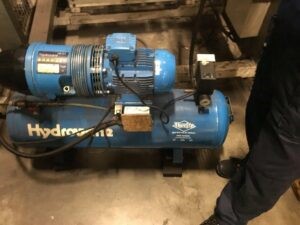 A warehouse management solutions company has been fined after an employee was electrocuted while servicing an air compressor.

Maidstone Magistrates’ Court heard that on 8 December 2017, Andrew Meade was carrying out pre-planned maintenance on an air compressor at a distribution centre in Gravesend, when he was electrocuted. He was not found for more than an hour following the incident. His injuries were fatal.

An investigation by the Health and Safety Executive (HSE) found that the control measures in place to prevent contact with electricity during maintenance activities were not suitable or sufficient. The electrical systems had not been tested or visually inspected since installation, and an incorrect isolating switch had not been identified.

Logistex Limited of Kettering Parkway, Kettering, Northamptonshire pleaded guilty to breaching Section 2(1) of the Health and Safety at Work Act 1974. The company was fined £180,000 and ordered to pay full costs of £23,358.16.

“This was a wholly avoidable incident, caused by the failure of the company to implement safe systems of work and identify the risks. Had the company identified the correct isolation point for the compressor and ensured that employees were sufficiently trained and supervised in the lock off procedures expected of them then this fatal incident would not have occurred.”