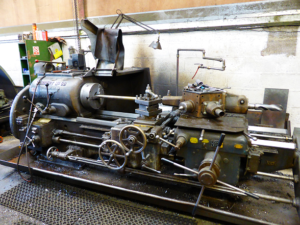 A Stockport decking manufacturer and a company director have been fined after a delivery driver was crushed by a poorly lifted load.

Manchester Magistrates’ Court heard how on the 30 April 2019, a HGV driver was delivering packs of five metre lengths of plastic deck boards to Ultimate Systems Ltd. Several packs of decking were stacked on pallets with an approximate weight of over 2000 kgs.

Company director Andrew Kerr used a forklift truck (FLT) to unload the delivery, lifting the entire stack of pallets at once, which exceeded the FLT load capacity. This caused the forklift to tip forward, which resulted in the load falling onto the HGV driver, trapping him between the load and his own vehicle.

The driver sustained crush injuries to the spine, multiple rib fractures, a broken left collarbone, a punctured lung and ligament damage to the neck. He spent six weeks in Manchester Royal Infirmary, four weeks in an induced coma. He was unable to work for a year.

An investigation by the Health and Safety Executive (HSE) found Mr Kerr was not trained to operate the forklift truck. There was no safe system of work for unloading or loading of decking, and no rules for visiting drivers to wait in a safe area.

Ultimate Systems Ltd of Second Avenue, Poynton Industrial Estate, Poynton, Stockport pleaded guilty to breaching Section 3 (1) of the Health and Safety at Work etc. Act 1974 and was fined £38,000 and ordered to pay costs of £3,741.10

Andrew Kerr of Burnside Way, Winnington, Northwich pleaded guilty to breaching Section 3 (1) of the Health and Safety at Work etc. Act 1974 and was sentenced to 14 weeks imprisonment suspended for 18 months with an additional requirement to complete 180 hours unpaid work and ordered to pay costs of £3,472.30.

Speaking after the hearing, HSE Inspector Stuart Wood said: “Those in control of work have a responsibility to ensure the methods they use to unload and load vehicles is safe.

“If forklift truck operator training and specific site rules to visiting drivers had been in place the serious physical injuries sustained by this driver could easily have been prevented.”