Fire Extinguishers – Do you know which one to use? 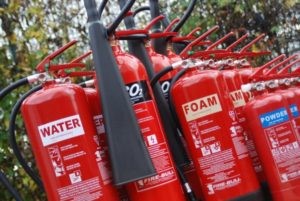 Nearly 4 in 10 (38%) workers are using the wrong type of fire extinguisher to deal with electrical fires, a survey has revealed.

Do you know, which extinguisher to use and on what type of fire if needed in an emergency?

The survey found that 10% would use a foam extinguisher to put out an electrical fire.

Another 27% used ABC powder fire extinguishers (or dry powder extinguishers), which are suited to solids, flammable liquids and flammable gases – Class A, B, and C fires. They should never be used in small, confined spaces if there is a risk of inhaling the powder.

Both types of fire extinguisher can badly damage equipment that may be unaffected by the fire itself.

The survey which include H&S managers also revealed that 8% admitted they didn’t know which fire extinguisher they should use and 7% were unaware of the universal colour-coded system for fire extinguishers.

Each year, there are 40,000 fires in the workplace, which can put the lives of workers at risk but using the wrong type of fire extinguisher can also have major consequences,

Not only can it maximise the spread of a fire, it can cause major damage to a site and equipment, thus costing companies millions of pounds to repair the damage.

Using the correct fire safety equipment is of utmost importance, and it’s crucial that all staff on site are trained, aware and understand what type of fire extinguishers to use and in what situation.

It is also interesting to note that in this year 5 of the Top 10 Fines under the Fire Regulations included lack of Fire Awareness Training. For more information about these fines please click here.